Welcome to my bite size. One of 12 blogs in a new series looking at leadership characteristics. Here I explore the experience and learning from failure. We don’t like to talk about failure. Leaders can’t be allowed to fail, can they? we wonder will it be me next? how do I avoid failure? You need to change your mindset to expect and learn from failure. 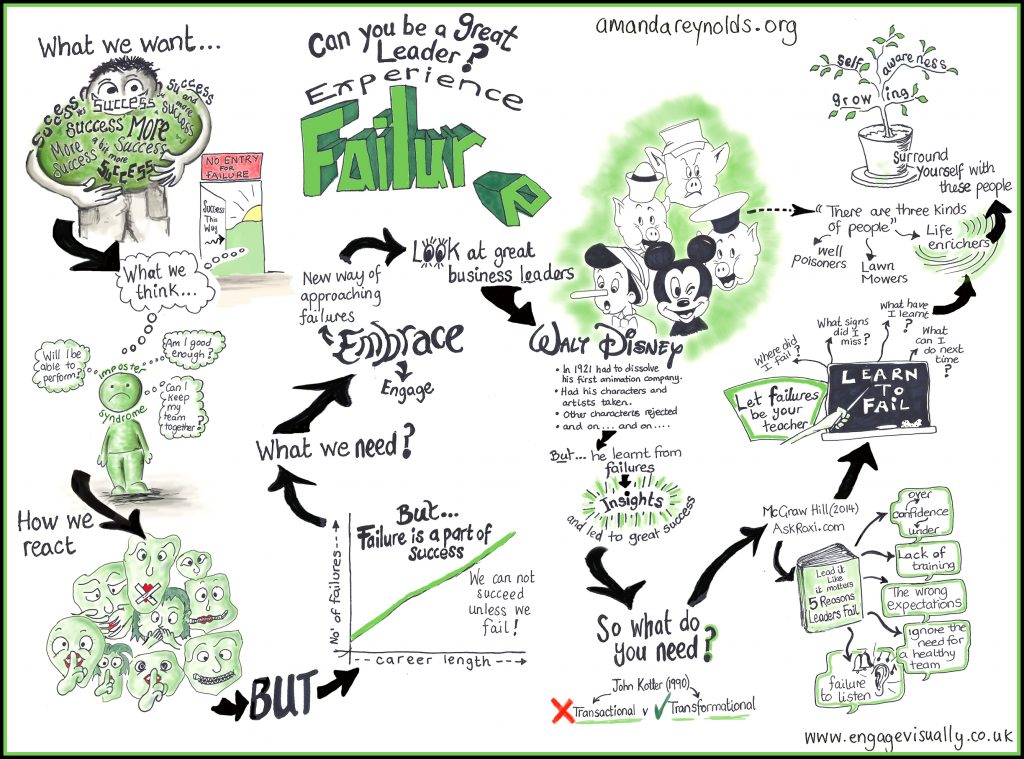 Take Walt Disney, failure after failure but that’s not the story we remember is it? His first animation company had to dissolve it as distributors didn’t pay him. Universal took his cartoon rabbit and claimed ownership! MGM told him Mickey Mouse would terrify women. Pinocchio production was shut down due to spiralling costs. When he did premiere it, his publicity was a disaster as the 11 people he hired got drunk and ran around New York! He experienced failure upon failure, but he learnt from his failures.

So why do leaders fail? In “Lead like it matters because it does” Roxi Hewertson, CEO of Highland Consulting Group and AskRoxi.com lists five reasons why leaders fail: Over or under confidence – Approaching leadership with the wrong expectations –Lack of training in the skills of the leader – Ignoring the need for a healthy team – Failure to listen.

If we are truly leading and reaching beyond safe and mediocre we will fail, we will sometimes push too hard. We may be in a culture that does not fit us well, not take people with us and not get the change happening. You might be failed by the business context. You may have a vision and values not aligned or we might have an innovation or idea ahead of its time.

Do not run away from your failure instead let the failures be your teacher. Ask yourself, with the support of your coach: Where did I fail? Were the examples above speaking to me? Were there signs of impending failure that I missed? Were people trying to warn me and did I not listen? What have I learnt? How did this failure impact my values? What can I do next time? How can I turn this lesson into a success in the future?

Then encourage yourself to try again. Surround yourself with “life enrichers” who will help you to rebuild and move forward. Walt Disney said: “There are three kinds of people in the world today,” “There are ‘well poisoners,’ who discourage you and stomp on your creativity and tell you what you can’t do. There are ‘lawn mowers’ – people who are well- intentioned but self-absorbed; they tend to their own needs, mow their own lawns and never leave their yards to help another person.”

Finally, there are ‘life enrichers’ – people who reach out to enrich the lives of others, to lift them up and inspire them. We need to be life enrichers, and we need to surround ourselves with life enrichers.”

Contact me for executive coaching, facilitation and keynote speeches